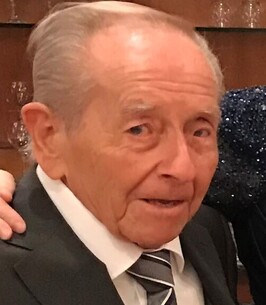 Jack Murray of Kings Park, NY passed peacefully at his home on April 8, 2022 surrounded by his loving family. He was 86 years old.

Jack is survived by his wife Barbara; his children Richard (Joanne), Linda, Christopher, and Joyce (Vincent) Salamon; his grandchildren Alessandra LaBadessa, Nicholas, John, and Ricky Murray; and his brother Robert. He is predeceased by his parents George and Helen (née Lyons), and his siblings Alice, Catherine, and George.

Jack married Barbara on February 11, 1962 during a winter blizzard and then enjoyed a tropical honeymoon in Bermuda before settling down in Brooklyn to start a family. They had four beautiful children and recently celebrated their 60th wedding anniversary.

Jack and Barbara moved to Kings Park, NY in 1970 to be closer to Jack’s work at Knickerbocker Liquor Corp in Syosset. Jack enjoyed a long career in the wholesale liquor distribution industry and retired in 1998.

Jack was proud of his time as an active Volunteer Firefighter and EMT for the Kings Park Fire Department and remained an Associate Member until his death.

Jack had a wonderful sense of humor, twinkling blue eyes, and a joy for life. He loved to tell stories and had quite a repertoire of character voices. For much of his life, he was a competitive league bowler and he maintained an enviable left hook well into his eighties. Jack’s happy place was always near the water. He loved to swim and sunbathe, and spent many happy hours at local beaches. He was also a skilled water skier who often delighted his kids by dropping skis and performing other tricks. Later in his life, Jack spent much of his time relaxing at the Bluff, fishing, and boating on the Long Island Sound.

All rights reserved. This obituary is also archived at obittree.com